I follow a number of FB groups and forums about 3D printing in general and the Folger 2020 i3 in particular and questions about auto level keep coming up.  The 2020 i3 doesn’t ship with autolevel, but when I ordered mine I thought auto level sounded like something I’d like and Folger sold an inductive sensor for just under $4 so I tossed one in with my order. 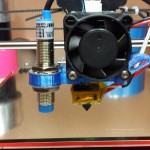 Little did I know what I was about to get into.  Let’s see if I can make this a little easier for other people than it was for me!  After the break I’ll explain what autolevel is and how it works as well as share my experiences setting it up and using it.

END_OF_DOCUMENT_TOKEN_TO_BE_REPLACED

Yeah, I know.  I haven’t even finished blogging about the build of the 3D printer.  I do want to add more about that, but it’s proving very difficult to do more than 24 hours after I did it.  I may be doing some re-wiring on it to clean things up soon and that will make it easier to remember the gotchas I ran into.  The 3D printer has been working great for me – a few minor issues now and then but is overall really working better than I had expected.  So the past week I’ve had it busy working on parts for my next project.  I estimate I still have around 35 hours of printing (give or take 10 hours) before I can move onto the next stage of this project but here’s the start of my attempt at building a CNC machine.

END_OF_DOCUMENT_TOKEN_TO_BE_REPLACED

An idea so perfect…

How I never thought of this I’ll never figure out.

Yeah, the amp I made sure came out clean: But I win zero points for style when compared to this:

Last sunday while we were recovering from the previous nights party, Amy and I remembered about the Yuma Bargain Warehouse and decided to go see if we could find a new tarp for the carport. I had guestimated that it would be a 20′ x 20′ tarp…and after measuring the tattered rempains of the original that was looking about right. At the warehouse we found a good selection of tarps, of course the one we liked best (green mesh) they were out of in 20′ x 20′. But they had black mesh, heavy duty white and silver in that size. The black mesh was tempting…but being a mesh we weren’t sure if it would give as much shade as we wanted – and it was over double the cost of a silver or white tarp. The silver we didn’t like the looks of so at $37 the white tarp won out. We also picked up 2 – $2 bundles of nylon rope and headed home. Last night we finally put the tarp up, took a little over 30 minutes. END_OF_DOCUMENT_TOKEN_TO_BE_REPLACED