Well, within the next month at least. Jason and I are both getting excited. I am a bit apprehensive, but things are starting to come together and that is good. I think we are both very tired, but what new parent-to-be or new parent isn’t? We’ll get used to it, hopefully.

Today I thought I felt the earth move. And I probably did. But it wasn’t the earth that was shaking (or at least I’m not sure if we had too many large aftershocks today) — it was the baby rocking the boat. She’s getting pretty big now, at least it seems to me. Her kicks aren’t as strong because there ain’t much room to move around in there. But when she rolls or flips or has the hiccups or tries to flap her arms, everything moves. Even my chair. Sometimes she moves just up and out of the blue and I tend to roll with her for some odd reason. It’s like miniearthquakes all the time.

Oh sure, she has a regular wake/sleep pattern that I know pretty well. She does change it up every couple of days, though, I guess this is normal. I like laughing at her and how she vies for my attention or if I put something on my stomach that she doesn’t like or wants to play with (Wii controller, she likes; tight pants, not so much).With the first baby, it’s hard to know. Everyone has an opinion and everyone says something different. That just goes to show you how unique babies are as individuals even when they aren’t here yet.

And speaking of “getting here,” we hit 34 weeks on Tuesday, so baby is coming soon. A couple in our childbirth class who was a month ahead of us (timewise, anyway) had their baby on Wednesday, a beautiful boy. So, it seems more real as time draws closer. If only the nursery were done. But that’s a weekend project for this weekend (hopefully).

Had a big (7.2) earthquake only 55 miles away yesterday.  That’s been followed by a host of aftershocks…and today 40MPH winds.

My rear fence is really hurting again.  I don’t expect the older tarp to last the night on the carport. 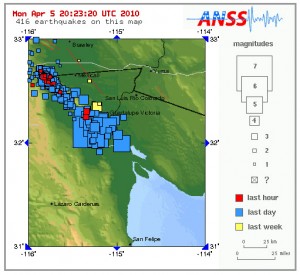 USGS maps of quakes near us from this afternoon.

Checking the live map now it looks like it’s up to 533. END_OF_DOCUMENT_TOKEN_TO_BE_REPLACED

Time for a new window

The screen never fit right in our dining room window, so I figured we should replace it.  Read more for the photos.

END_OF_DOCUMENT_TOKEN_TO_BE_REPLACED END_OF_DOCUMENT_TOKEN_TO_BE_REPLACED

The sprog is coming…

We had our last child birth class tonight. In some ways, it was kind of sad. In some ways, I’m glad it’s over. Just don’t ask me any questions, because I’m not sure how much I’ll remember in 13 weeks when the baby is due. Yes, baby. Due in 13 weeks from today. Scary. Exciting. Life-changing. And no, the nursery is not done. Not anywhere near done. Time to get hopping.

Ok, I’m still working on the article about building CBG#2: But it’s the last day of the contest so I’ve got to try one more entry:

How to build a cigar box guitar – Free Plans at www.cigarboxnation.com.

Clogging my own pipes

Ok, yeah it really need to start updating around here better.  Looks like the newer versions of WP have some better facebook/twitter and most importantly smugmug interfaces…so I may actually start updating this more often again soon.

In the meantime rather than post about my own CBG I’ve been building…which I really should do.  I’m going to post about Cigarboxnation so I can try and win a professionally built CBG.  In exchange I promise I’ll come back and post a real writeup about my CBG at some point…and update this software…and install Amy a blog for the upcoming baby.  Oh yeah…I guess I haven’t even mentioned that here lately either.  Facebook…you made me lazy!

How to build a cigar box guitar – Free Plans at www.cigarboxnation.com.